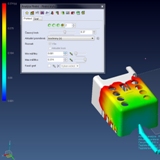 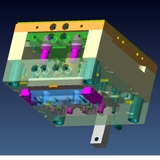 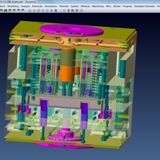 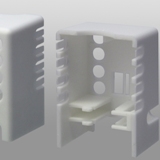 When a mould-maker in the Czech Republic received an order from a company making electrical coupling components, they began the design and manufacturing process with specialist software they had only recently purchased.

Although TVAR Pardubice have used a range of VISI modules from Vero Software since 1999, it was only last year that they invested in the plastic injection analysis system, VISI Flow, which checks mould design and the optimum placement of injection gates.

Now, before they start to create technical moulds like those ordered by Elektro Bečov for manufacturing plastic terminal covers, TVAR Pardubice use VISI Flow to optimise the tool design and moulding process parameters. This ‘preventative analysis’ detects a wide range of potential manufacturing issues such as warpage, weld lines, air traps, filling issues and hot spots, while determining the optimum gating position.

Without it, according to Jim Dolezal, Design Office Manager, many problems would not be identified until the moulding trial: “If there’s difficulty filling the part it may mean changing the gate, or even moving the gate and runner. This can’t be done on the press, so the mould would have to go back to the toolroom to be reworked, and then back into the mould shop to be sampled again. But VISI Flow detects such problems so we can make the changes before starting to produce the mould which not only helps us to minimise costs but also helps us to save valuable manufacturing time.”

TVAR’s suite of VISI software, provided by VISI spol. s.r.o., focuses on all tool and mould issues, enabling them to create complex and high-surface-quality mouldings, in four principal industry sectors: technical parts, packaging, consumer goods, and lamination. For example, VISI Analysis analyzes the part through the curvature surfaces analyzer, draft analysis, and different ways of searching split lines and surfaces, along with other analytical tools to diagnose memory elements or compare parts graphically. And VISI Mould provides a complete solution for 3D parametric mould design, based on industry-specific automation to guide them through the entire mould development process.  This has contributed to the company’s inclusion in “The 100 Best Czech Companies” on several occasions.


Bečov Electric’s engineers designed the terminal cover in Solid Edge, and also designed the basic moulding; then TVAR used VISI CAD/CAM for the final design, plastic injection analysis and to manufacture the mould. Files were exchanged for comments in STEP format and also verified in Parasolid format. Parts of the moulding to be changed were highlighted by color or new alternatives of the moulding were suggested. There were several variants of mouldings, which were slightly different.

Elektro Bečov delivered product drawings with tolerances and other requirements, and due to the expected high number of products it was agreed to use a double mould with the following spec:

It was at this stage that VISI Flow was used to check the design of the mould and placement of the injection gates, showing a full picture of how the tool would perform in the moulding machine, and giving TVAR the confidence to commit to making the mould.

The double mould was designed with the cold tip tunnel gate placed on the front part of the moulding, under the lunate sidecut. A cavity plate surrounds the moulding from three sides, including cylindrical and shaped protrusions that make up the holes on top and a side wall. There is only one insert, for the label of the cover. The cavity is manufactured by wire erosion machining (EDM).

Due to the open back of the moulding and the location of hook-shaped internal partitions, slides containing shaped inserts move to the core plate. Two core plates form a variable split plane – one for each moulding.

The shape is manufactured on the milling machine; details are sparked and the forming part is polished.

Due to the need for a good air trap release and planchet endings at the sides of the moulding, a venting groove was created along the whole circuit of the moulding. Tempering channels run around the shape of the cavity in the cavity plate and in the cavity plate frame. There is a tempered cylindrical cavity with a partition in the center of the core plate.  Tempering liquid is supplied there from the frame of the core plate.

The terminal cover is ejected from the moulding firstly by the movement of the slides when the mould is opened, and then the subsequent use of ejectors.

Programming for CNC machining is done in the VISI Machining module. Many machining strategies are specially focused on the mould manufacturing, where the main concerns are accuracy, quality and optimization of time and material costs.

"Without VISI Flow many problems would not be identified until the moulding trial. But VISI Flow detects potential manufacturing issues swuch as warpage, weld lines, air traps, filling issues and hot spots, while determining the optimum gating position, so we can make any necessary changes before starting to produce the mould."